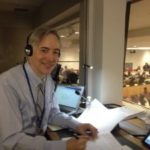 M.A. in translation from E.S.I.T., the graduate school of interpreting and translation of the Sorbonne.