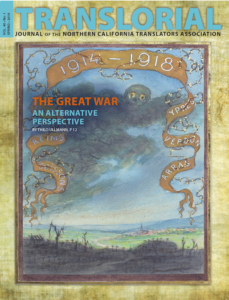 NCTA members can now enjoy the latest edition of Translorial in print and downloadable PDF versions, covering a variety of topics. This edition celebrates the 40th anniversary of Translorial, which was established in 1978. You can find the very first edition from May 1978 in the NCTA archive (members only). Publicly accessible articles from 1978 can be found here.

If you are not an NCTA member, you can join here.